I took a mixed media workshop last week and while we were all writing down affirmations to be the hidden background of our pieces, it occurred to me that I could paint portraits that way — with the story of the animal in the background, the way stories are always the underpinnings of our lives.  So, I wrote part of Miss Cali’s story and painted her portrait. 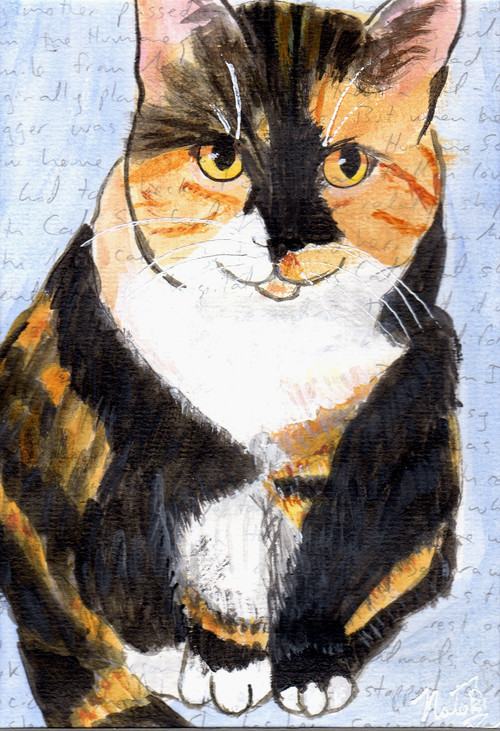 Miss Cali was my mother’s cat.  Adopted from the Humane Society when Mom moved into her new home in West Nashville in 2011,  Cali was already 7 years old, up for adoption after her previous owner had passed away.  Cali and my Mom had a good thing going.  They liked to sit on the sofa in the mornings, watching the birds out the window while reading (sitting on) the newspaper and listening to classical music on the radio. Mom was newly retired and Cali was her new best friend.  Then, in November 2014, my mother ended up in the hospital.  Her cancer had returned.  I flew out to hold down the fort and figure out the logistics of treatment and moving Mom into an assisted living facility… but unfortunately, she passed away in December. I knew I couldn’t keep Cali because I had 2 older cats at home in California and they had their own difficulties; bringing another cat into the mix would cause chaos.  But soon after I placed an ad on Craigslist, I found a lump on Cali’s throat… and I knew that was not a good thing.  A biopsy confirmed: Lymphoma.  I could not adopt out a cat with cancer…. so my husband and I agreed to get her treatment and bring her home — and deal with the chaos later.  She had a lumpectomy in January of 2015 and as soon as she was ready to fly, I brought her with me back to San Diego.  The girls, Java and Sahara, were not amused.  In fact, Java fled into the garage and stayed out there for nearly a year!  But Cali was here to stay.  We took her to the Emergency and Specialty Vet Clinic and they gave her chemo treatments until Cali decided she was done: she simply refused to be sedated anymore no matter how much medicine was given.  A true, stubborn calico!  But she knew her own body and when she was done, she was done.  She has been cancer-free since March of 2015, which is quite a feat since lymphoma is usually horrible and deadly.  We all went to the pet psychiatrist for awhile and found that anti-depressants helped lessen everyone’s anxiety and gradually, harmony returned to our home and the cats learned to live together.  Cali now has her special place on top of the sofa.  She enjoys supervised walks in the back yard and chasing after chicken treats.  She probably misses being Mom’s only cat, but I think she is happy here now.  And I’m grateful we decided to adopt her because she is such a sweet girl and we love her so much.

If you would like me to make a story portrait of your pet, please send me a message and we’ll start the process.  OR, you can order one in 3 available sizes on my Etsy Shop.  Prices start at $55 and include free shipping.

June 2019Merry Month of May